Join us on our next Vineland Estates Winery River Cruise along the Rhône in November 2023.

From romantic cities to foodie havens and artistic epicenters, this itinerary enlivens all your senses. Embark in Lyon, France’s culinary capital and savour the beauty of legendary vineyards and imbibe in local vintages like Beaujolais and Côtes du Rhône. You can even become an expert in all things culinary: go in search of the highly prized “Black Diamond” truffles and learn how to pair chocolate with wine. Trace the steps of famous artists in Arles and Carrières des Lumières. Lower the drawbridge of your fantasies in Avignon, a sprawling commune with an overwhelming array of UNESCO World Heritage Sites, intriguing art museums and historic charm, before your return flight home

Accompanying us from Vineland Estates Winery on this fabulous cruise will be Adele Shennan. If you have been able to visit the winery lately you would have seen and met Adele at the Wine Club Mixers and also around the wine store. Adele has been in the wine business for 15 years and received her Sommelier certification in 2014. Many years ago, Adele worked in the travel industry and so wine and travel make a perfect pairing for Adele and she is very much looking forward to our adventure next year!

What: Colours of Provence on AmaKristina

Where: Lyon to Arles, Rhone River. See below for the full itinerary

See Tabs below for full details.

Click here to watch our virtual presentation from 17th November. 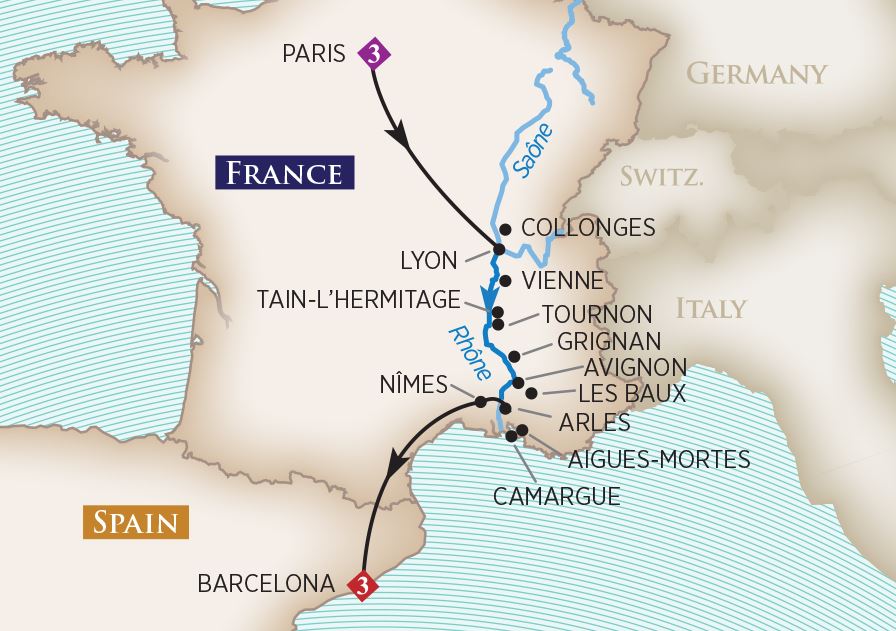 Day 1, PARIS. Check into your Paris hotel for the beginning of your Colours of Provence pre­cruise land program.

Day 2, PARIS. Enjoy a morning tour taking in the signature sites of Paris, including the awe ­inspiring Arc de Triomphe and iconic Eiffel Tower. (B)

Day 3, PARIS. Enjoy a full day at your leisure to discover more of this romantic city, such as the world­ renowned Louvre Museum or Musée d’Orsay. Perhaps go shopping in the Faubourg Saint­-Honoré district or simply relax and spend the day like a local – by scoping out a local café for a café au lait, toasted baguette or croissant. In the evening, visit Montmartre, long known as the city’s premier artist's enclave. During the mid to late 1800s, artists also began calling Montmartre home. Pissarro and Jongkind were two of the first to live there, followed by other notable artists, including Edgar Degas, Henri Matisse, Toulouse­Lautrec, Pierre­-Auguste Renoir and Pablo Picasso. You’ll be taken on an evening illumination tour, discovering why Paris is renowned as the “City of Light.” (B)

Day 4, PARIS ­ LYON ­ EMBARKATION. Check out of your Paris hotel and head to the train station to board the TGV high­speed train through the French countryside to Lyon. Once in the “food capital of France,” marvel at an indoor market hall where you’ll have a chance to sample of the delicacies offered by butchers, bakers, chocolatiers and cheesemongers while taking in the colorful sights and enticing aromas around you. Afterward, embark the ship in Lyon for your Colours of Provence cruise. (B,D)

Day 1. LYON. Embark the ship in Lyon for your Colours of Provence cruise. (D)

Day 2, LYON. Travel to the Beaujolais wine region—known as the Pays d’Or or “land of the golden stones.” Indulge in a wine tasting at a traditional winery and learn about the history and techniques of their vineyard. (B,L,D)

Day 3, LYON. Discover dynamic Lyon, starting in Fourvière Hill, part of the city’s historic region that is now a designated UNESCO World Heritage Site and home to the 19th­ century basilica Notre ­Dame de Fourvière. Continue on to the old town of Lyon, followed by a guided walk through the St. Jean district, where you will be introduced to the city’s unique covered walkways, known as “traboules.” Alternately, join a guided bike tour through the city designed with cyclists in mind. In the afternoon, enjoy the rest of your day at your own leisure to explore the city. (B,L,D)

Day 4, VIENNE. Situated between the wine regions of Beaujolais and Côtes du Rhône lies Vienne with a Roman past that can be seen in its marvelously preserved ruins. Follow the footsteps of the ancient Romans on a walking tour to see the amazingly well ­preserved Augustus and Livia Temple, the Saint Maurice Cathedral, a Gothic church that took more than 500 years to build, and St. Pierre Abbey—one of the oldest surviving churches in France, and now an Archaeological Museum. For those wishing to be more active, you can either take a guided hike from the ship to the Monastery at Mount Pipet or a guided bike tour along a portion of the ViaRhôna bike route. (B,L,D)

Day 5, TOURNON. Take an exclusive private train ride past magnificent landscape carved along the Gorge du Doux, stopping at the charming little station of Colombier le Vieux­Saint Barthélemy le Plain, where the train maneuvers in preparation for its return journey. Alternatively, lovers of wine and chocolate will want to visit Le Château de Tournon for a presentation and tasting on the pairing of red wine and chocolate. For a more active adventure, take a hike through the vineyards of Tain l’Hermitage, followed by a visit to a local winery where you’ll sample some of the wines. (B,L,D)

Day 6, AVIGNON. Depending on your interests, you have three choices of excursions for the morning. Avignon, aptly named the “City of Popes,” was the center of the Catholic Church in the 14th century when its “Palais des Papes” was the equivalent of today’s Vatican. Discover the history of Avignon on a guided walking tour that includes the Papal Palace and the well­ preserved medieval walls surrounding the historic center of town, a UNESCO World Heritage Site. You can visit three venues around Avignon to taste regional specialties including macarons, cheese and wine, and tapenades or you can enjoy a bike tour. During the afternoon, you can go to another UNESCO World Heritage Site, the impressive Pont du Gard, a Roman aqueduct that is a masterpiece of ancient engineering. Alternately, you can go to the magnificent hilltop village, Grignan. After visiting this enchanting Provençal town, go in search of the highly prized “Black Diamond” truffles with a farmer and his trustworthy canine companion. In the evening, enjoy a short cruise to the Pont d’Avignon, illuminated against the night sky. (B,L,D)

Day 7, ARLES. Considered one of the most beautiful cities in France, Arles enchants all with its tantalizing history, formerly a Roman center of trade. Join a guided walking tour where you’ll visit the Roman ruins of Arles such as its Roman Amphitheater and the Church of Saint Trophime, famous for its Romanesque architecture. Alternatively, you can enjoy a bike ride along the Rhône, through town to the Langlois Bridge, a famous subject from several Vincent Van Gogh paintings. And for those who wish to delve further into Van Gogh’s Arles, join a special walking tour along with a visit to the Vincent van Gogh Foundation, showcasing his legacy. During the afternoon, you’ll venture to the medieval hilltop village, Les Baux de Provence and then delve deeply into the Carrières des Lumières, where you’ll be treated to a spectacular presentation of art, sound and history projected on the former limestone quarry walls of caves. (B,L,D)

Day 8, ARLES   DISEMBARKATION. Disembark your ship in Arles. (B)

Day 8 ARLES BARCELONA DISEMBARKATION. Disembark your ship in Arlse and board the TGV high­speed train to the city that inspired Antoni Gaudí and is certain to inspire you. (B)

Day 9, BARCELONA. Barcelona, the bustling capital of Catalonia, is an artist’s, architect’s, foodie’s, historian’s and culturist’s dream. Tour the cobblestoned lanes of the Gothic Quarter in the medieval city center and Las Ramblas. See some of Antoni Gaudí’s imaginative architectural creations, La Sagrada Familia. (B)

Day 13, BARCELONA. Join an excursion to the mountain Montserrat, which is home to the Benedictine monastery of Santa Maria de Montserrat, located about 30 miles from Barcelona. Once there, you’ll ride a scenic funicular to the top of the mountain and experience an indescribable view of the Catalonia landscape. The monastery, officially founded in 1025, soon began to receive pilgrims and visitors who contributed to the spread of stories of miracles and wonders performed by the Virgin Mary. The whole of Montserrat is built around facilitating the worship of the Black Madonna in the Basilica. While here, you’ll see the famous Black Madonna sculpture, which sits at the back of the church, above the altar area. The stairway leading to the statue, plus the room and altar in which the statue sits are ornate, golden and pay tribute to the wonder that is the Virgin herself. (B)

Day 14, DEPART BARCELONA. Bid farewell to Barcelona and prepare for your homeward flight. (B)